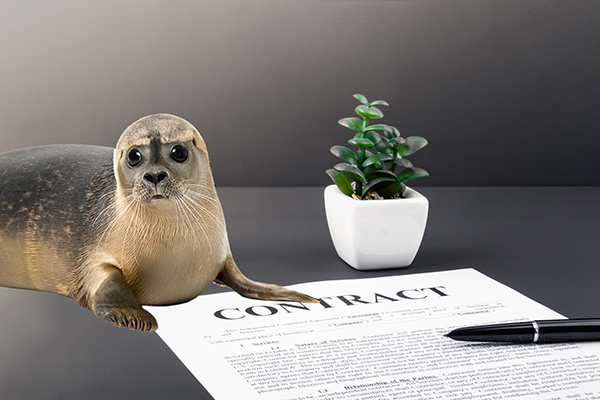 In Maryland, the “limitations” period for most contract claims is only three years.  Let’s assume, for example, that you perform work for a customer and then send an invoice for which payment is due within 30 days.  If the customer fails to pay the invoice, you would have three years from the due date to file a lawsuit to collect on the invoice.  If you fail to file by that three-year deadline, the invoice would essentially become uncollectible.

Another strategy, which is rarely used, is to make sure the contract is signed “under seal.”  Under Maryland law, a party to a contract signed under seal has 12 years after a breach by the other party to bring a suit to enforce the contract. A contract under seal is sometimes also referred to as a “sealed instrument” or a “specialty contract.”  In the old days, corporations would affix an embossed corporate seal next to the signature line in order to verify that the contract was an authorized corporate action. This was often a raised seal crunched into the paper using a clunky metal device.  More modern applications involved a rubber stamp, which was eventually replaced by the convention of simply typing the word “SEAL” in parentheses. This is a somewhat archaic custom, which has largely been abandoned.  Under modern law, corporations are no longer required to affix a seal in order to make a contract enforceable, although some companies still employ this practice.

Affixing a corporate seal, however, is not necessarily the same as signing a contract “under seal” for purposes of the statute of limitations.  Simply including the word “seal” next to a signature line is not sufficient where one of the parties to the contract is a corporation.  This is because inclusion of the word “seal” may have been intended to designate that the contract is being signed by an authorized corporate officer with access to the corporate seal, rather than for the specific purpose of extending the statute of limitations. Therefore, when a corporation is a signatory, a party who wishes to extend the limitations period must be prepared to offer testimony or other evidence that both parties specifically intended to do so.  In most cases, it would be very difficult to prove the parties had intended this outcome, since, in truth, they almost certainly did not. During contract negotiations, parties and their attorneys are usually concerned about deal terms, such as price, payment terms, scope of work, and so forth.  They are rarely thinking about how long they will have to bring a lawsuit in the event of a breach.

If you are the party more likely to enforce a contract (e.g., to collect unpaid fees or repayment of a debt), there is one way to increase the chances of extending the limitations period by including specific language in the contract.  Adding a clause above the signature line that the contract is signed under seal with the specific intent that the contract is a sealed instrument and a specialty contract under Maryland law may help convince a court that the parties intended to extend the statute of limitations.

Even then, adding this type of boilerplate language may not be sufficient to establish intent.  Depending on how important an extended limitations period is, it may also be advisable to demonstrate intent with other, extrinsic evidence, such as email correspondence confirming that this was the intent of the parties.

For questions about this article, or any other business-related matter, please contact an attorney in our Business and Transactions practice group.